In this tutorial, after explaining about running Docker in my Mac. Now, it’s time to move those dockers on your laptop to production environment. In VMware, we will utilise vSphere ESXi as the production grade virtualisation technology as the foundation of the infrastructure.
In production environment, lot of things need to be considered. From availability, manageability, performance, reliability, scalability, security (AMPRSS). This AMPRSS considerations can be easily achieved by implementing docker container from your development environment (laptop) to the production environment (vSphere ESXi). One of the concern of docker technology is the containers share the same kernel and are therefore less isolated than real VMs. A bug in the kernel affects every container.

vSphere Integrated Containers Engine will allow developers familiar with Docker to develop in containers and deploy them alongside traditional VM-based workloads on vSphere clusters, and allowing for these workloads to be managed through the vSphere UI in a way familiar to existing vSphere admins.
Docker itself is far less capable than actual hypervisor. It doesn’t come with HA, live migration, hardware virtualization security, etc. VIC (VMware Integrated Containers) brings the container paradigm directly to the hypervisor, allowing you to deploy containers as first-class citizens. The net result is that containers inherit all of the benefits of VMs, because they are VMs. The Docker image, once instantiated, becomes a VM inside vSphere. This solves security as well as operational concerns at the same time.
But these are NOT traditional VMs that require for example 2TB and take 2 minutes to boot. These are usually as big as the Docker image itself and take a few seconds to instantiate. They boot from a minimal ISO which contains a stripped-out Linux kernel (based on Photon OS), and the container images and volumes are attached as disks.
The ContainerVMs are provisioned into a “Virtual Container Host” which is just like a Swarm cluster, but implemented as logical distributed capacity in a vSphere Resource Pool. You don’t need to add or remove physical nodes to increase or decrease the VCH capacity, you simply re-configure its resource limits and let vSphere clustering and DRS (Distributed Resource Scheduler) handle the details.
The biggest benefit of VIC is that it helps to draw a clear line between the infrastructure provider (IT admin) and the consumer (developer/ops). The consumer wins because they don’t have deal with managing container hosts, patching, configuring, etc. The provider wins because they can leverage the operational model they are already using today (including NSX and VSAN).
Developers will continue to develop dockers and IT admin will keep managing VMs. The best of both worlds. 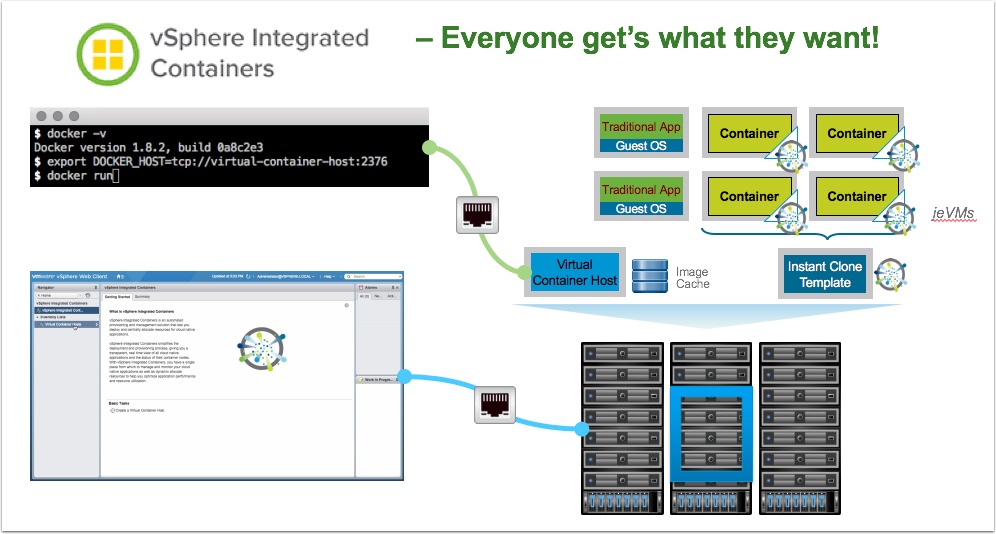 It also can be combined with other enterprise tool to manage the Enterprise environment, such as vRealize Operations, vRealize Log Insight, Virtual SAN, VMware NSX, vRealize Automations.
In this post, I will utilise these technologies from VMware:

This is the diagram block for those components:

*to be continued in part 2.
Kind Regards,
Doddi Priyambodo